Have at least a decent knowledge of skate graphics. With two volumes of Sean Cliver (amazing) Disposable books, there’s really no excuse not to. Who wants to be the asshole throwing a screaming hand graphic in Santa Cruz? Not me.

Plus, you’ll need to know who to sell your wares to, right? Every business is different. Who is the artistic director? Is there an artistic director? Sometimes the team leader steers the graphic ship, sometimes it’s the owner. Find out these things. It’s a lot easier in the social media age we live in today than it was in 2003. Sometimes the generic email address will get you a response, but most of the time it won’t… Make Google your new best friend, LinkedIn can be very handy too. Not that you need an excuse, but you should also read as much skateboarding media as possible! I have subscriptions to the 3 main magazines and I read chrome ball, Jenkemand the slapping boards often. The more you know, the more you grow, as they say. 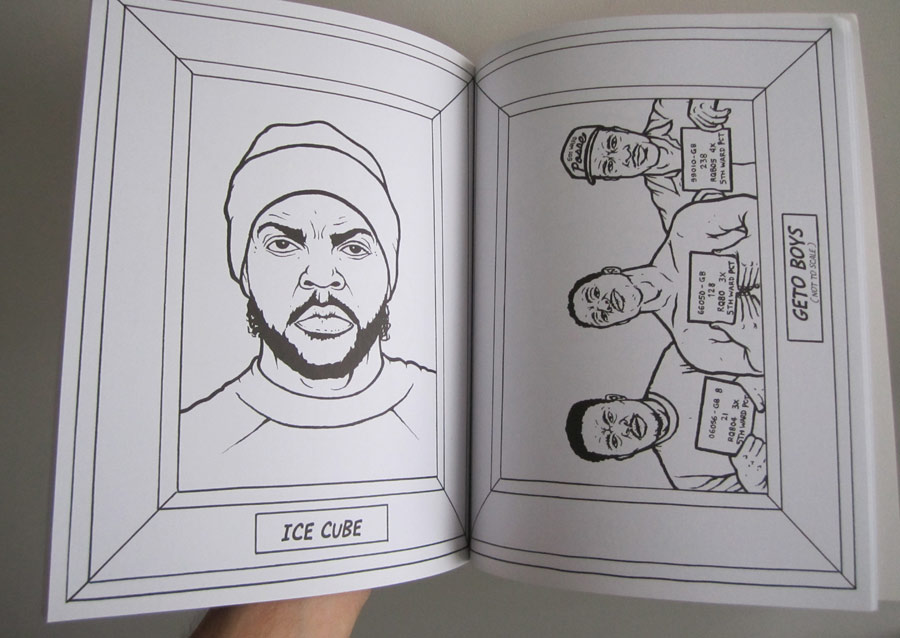 You actually have to be good/decent/passable in art. Not that I’m all that, but before I got my first skateboard, I had been working professionally in my small town for a decade, and I made some noise with my Gangsta Rap coloring book. Any foothold is important, and in my case, having something under my belt already really helped me have a shot at working on skateboarding. 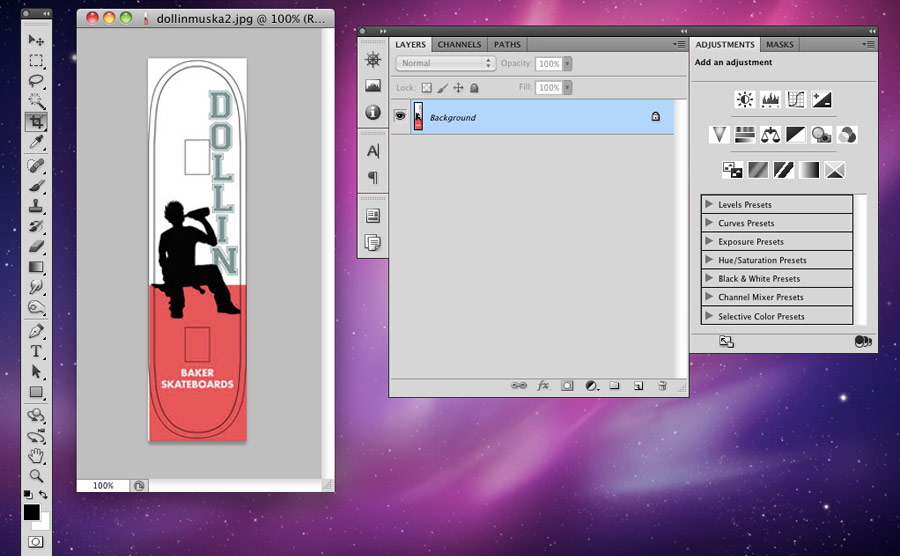 Even if you draw everything by hand, you should have a working knowledge of Photoshop and Illustrator. You should also be able to handle questions for the project, such as if there is a Kill Fee (when a company will pay for your time even if a project is not produced.) I have received several Kill Fees from Element before something I did for them was actually produced!

You also need to know how to stick to a budget, submit an invoice, and meet deadlines. This should all be covered before you start drawing. Know what you’re getting into to avoid surprises. In some cases, the payment process and paperwork took longer than the artwork itself.

After getting approval for a project, I go through several approval processes: after the first sketch, after inking, and again after coloring. It may take some time to wait for a response from your contact, but it will save you a headache when you are asked to completely redo something. In my opinion, once a project is approved, the company is obligated to pay for it, but they don’t always see it that way. You may even end up spending hours on a board that they decided not to do at the last minute. Know these things and you will be better off as it varies from company to company. 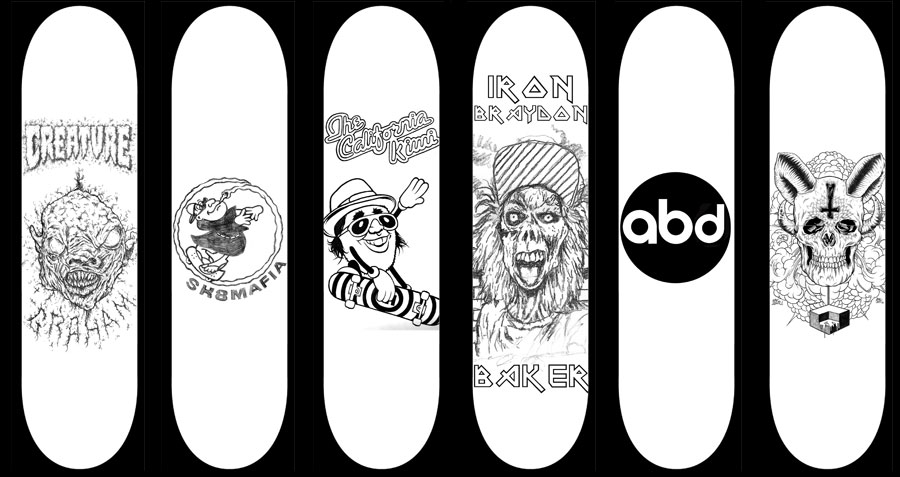 these advice ideas were all rejected

You can’t hear back. Shit, you probably won’t hear a response, but you’ve got thick skin, right? You might hear that your style doesn’t match well, and it might not. Don’t pitch a creature-like graphic to a business with a completely different vibe. As a freelance artist, I like to work in as many styles as possible, which broadens the scope of the work a bit. I recently spoke to the great John Lucero, and he was like, “Well, you can draw anything, can’t you?” which was about the compliment I could ask for.

You might be told you’re not good enough, and maybe you’re not! You don’t need to start swinging for the fences! Start by reaching out to smaller businesses, local stores, or anyone who can help you get people to know about your work. I also try to do as much clothing, prints or extra work as possible. It’s all a means to an end. Go from Am to Pro if you want to skate with terminology. 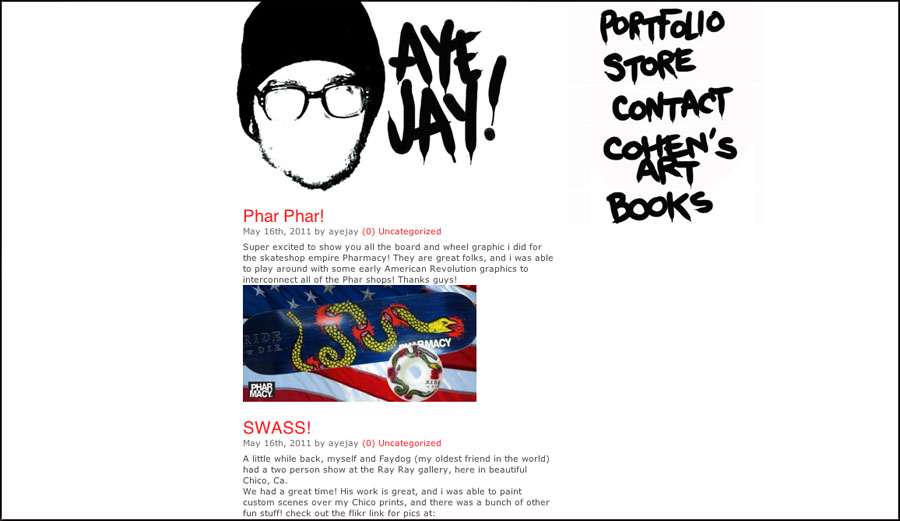 It’s the age of social media, and there are a lot of eyes looking down at tiny little screens. Promote your work any way you can. Instagram is the perfect medium for this, as well as Twitter/Facebook/Tumblr/Livejournal/Myspace. I’ve built countless contacts through these avenues and gotten quite a bit of work that way.

I try to have goals, and when you achieve one, it’s pretty rewarding. Start small: I want to draw a skateboard. So what? I want to do a series. So what? My current goal is to draw a chart for each SOTY. It won’t be easy, but if you’re reading this, Chris Senn! Yell at me!

Build relationships, stay in touch, but not to the point of being pushy. No one wants to hear from you all the time, but the occasional update or check-in can really help. There are a lot of really great people in the industry, and it’s a really interesting business. In my case, I was already friends with Todd Bratrud, who in addition to being one of the best skate artists of all time, was at the time artistic director of Consolidated Skateboards and had a very solid graphic base and admired. He was kind enough after being asked enough times that he gave me the green light to come up with an idea which was then approved and went into production. I received two boards for my service, but don’t think I didn’t hold back my tears when I opened this package. Thanks again, TB.

Learn as much as you can about this side of things and keep going. I emailed Ed Templeton for at least five years before I got the chance to do a painting for him, and now I have done more than ten and worked with him. It is overwhelming and rewarding. Moreover, he reigns, but you knew that. 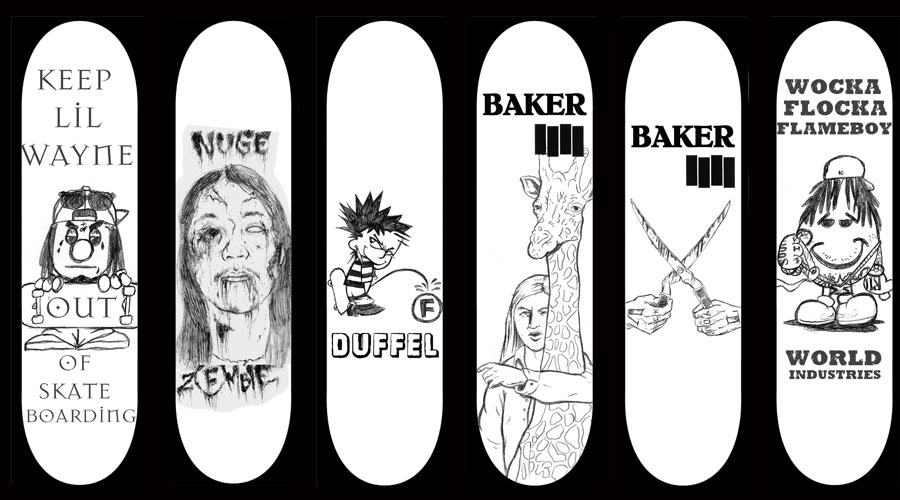 I was too excited to do a series of boards for Jaws only to have it canceled halfway through, due to Birdhouse going in a different graphic direction. I took it way harder than I should have and probably closed the door on working with them again. This stuff is going to happen so don’t take it too personally. Learn from your mistakes, by acknowledging your own mistakes you are more likely to grow and not repeat them.

In the past I have had art altered and changed without my permission, but that will happen too. It is like having thick skin. Not every draft will be a home run, darkslide switch, or any other sports metaphor you want to apply.

It is also possible to have your graphic ideas stolen. It sucks, but it happens. I covered this in my skate graphics article rejected for Jenkem, but there’s not much you can do other than hold your cards very close to your chest. Most people will respect you, but some won’t, as is the custom of the world. There is also money, or the lack of money. Most people don’t pay well. Don’t expect to make a mint, and if you’ve read this far, you’ll most likely be drawing boards for free. The occasional free is okay, but how much product do you really need commercially?

Skateboard art is one of the coolest mediums for an artist. It’s constantly self-referential, plays with pop culture, and goes where many other artistic avenues don’t, so have fun with it. You don’t dig ditches. Enjoy!