SIGGRAPH 2017 — LOS ANGELES — The same GPUs that bring games to your screen could soon be used to harness the power of AI to help game and movie makers go faster, spend less, and create richer experiences.

At SIGGRAPH 2017 this week, NVIDIA is showcasing research that makes it easier to animate realistic human faces, simulate the interaction of light with surfaces in a scene, and render realistic images faster.

NVIDIA combines our expertise in artificial intelligence with our long experience in computer graphics to advance 3D graphics for games, virtual reality, films and product design.

Game studios create animated faces by recording videos of actors performing every line of dialogue for every character in a game. They use software to turn this video into a digital duplicate of the actor, who later becomes the animated face.

Existing software forces artists to spend hundreds of hours revising these digital faces to better match the real actors. It’s tedious work for artists and expensive for studios, and it’s hard to change once it’s done.

Reducing the amount of work involved in creating facial animations would allow game artists to add more character dialogue and additional support characters, while giving them the flexibility to quickly iterate on script changes. .

Remedy Entertainment – best known for games like Quantum Break, Max Payne and Alan Wake — approached NVIDIA Research with an idea to help them produce realistic facial animation for digital doubles with less effort and at a lower cost.

Instead of having to perform laborious data conversion and edit hours of actor videos, NVIDIA’s solution only requires five minutes of training data. The trained network automatically generates all the facial animations needed for an entire game from a single video stream. NVIDIA’s AI solution produces more consistent animation and retains the same fidelity as existing methods.

Towards a new era in gaming

Antti Herva, lead technical character artist at Remedy, said that over time, the new methods will allow the studio to create bigger and richer game worlds with more characters than is currently possible. Already, the studio is creating high-quality facial animation in much less time than in the past.

“Based on NVIDIA Research’s work that we’ve seen in AI-powered facial animation, we’re confident that AI will revolutionize content creation,” Herva said. “Complex facial animation for digital doubles like this in Quantum Break can take many man-years to create. After working with NVIDIA to create video and audio deep neural networks for facial animation, we can reduce that time by 80% in large-scale projects and free up our artists to focus on other tasks. .

AI also holds promise for rendering 3D graphics, the process that turns digital worlds into the realistic images you see on screen. Filmmakers and designers use a technique called ray tracing to simulate light reflecting off surfaces in the virtual stage. NVIDIA uses AI to improve both ray tracing and rasterization, a less expensive rendering technique used in computer games.

To denoise the resulting image, the researchers used deep learning with GPUs to predict final rendered frames from partially finished results. Led by Chakravarty R. Alla Chaitanya, an NVIDIA research intern from McGill University, the research team created an AI solution that generates high-quality images from noisier and higher input images. approximate in a fraction of the time compared to existing methods.

This work is more than a research project. It will soon be a product. Today we announced the NVIDIA OptiX 5.0 SDK, the latest version of our ray-tracing engine. OptiX 5.0, which incorporates NVIDIA Research AI denoising technology, will be available free to registered developers in November.

NVIDIA researchers used AI to tackle a computer game rendering problem called anti-aliasing. Anti-aliasing is another way to reduce noise – in this case, jagged edges in partially rendered images. Called “jaggies”, these are stair-like lines that appear instead of smooth lines.

How AI draws the right rays

NVIDIA is developing more efficient methods for tracing virtual light rays. Computers sample the paths of many light rays to generate a photorealistic image. The problem is that not all of these light paths contribute to the final image.

Researchers Ken Daum and Alex Keller used machine learning to guide the choice of light paths. They achieved this by linking the mathematics of light ray tracing to the artificial intelligence concept of reinforcement learning.

Their solution learns to distinguish “helpful” paths – those most likely to connect lights with virtual cameras – from paths that don’t contribute to the image.

At SIGGRAPH, you can learn more about how AI is changing computer graphics by visiting us at booth #403 beginning Tuesday and attending NVIDIA’s SIGGRAPH AI Research Conferences: 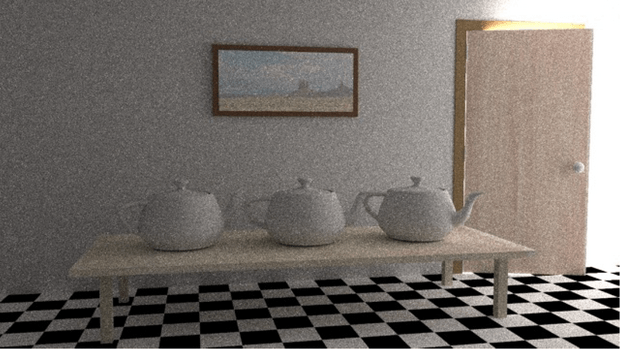 Simulating the light reflections in this virtual scene – shown without denoising – is a challenge as the only light comes through the tightly open doorway. NVIDIA’s AI-guided light simulation delivers up to 10x faster image synthesis by reducing the required number of virtual light rays.