Composed of three complex CG environments, based on low-resolution images of a reef at the start of its growth and in collaboration with renowned coral biologist Professor David Smith, the 90-second film follows the journey of a tropical fish Chromis from tragedy to hope as he weaves his way through an area of ​​the Indo-Pacific, passing over a devastated coral reef and towards a healthy reef bed, which serves as a bittersweet reminder of what’s at stake. In the final act, we see the Chromis encounter Hope Reef, an artificial coral reef, carefully planted to spell the word HOPE.

Framestore worked alongside advertising agency AMV BBDO and cat food brand Mars Incorporated SHEBA on the project. The mission of the SHEBA brand is to support vital reef growth projects and this venture marks the start of the largest coral reef restoration program in the world. The final reveal of the HOPE Reef was based on drone footage of the actual location, but shows what the reef will look like five years from now when the coral has fully grown back.

See the video of the spot.

Due to the pandemic, filming Hope Reef in real life was out of the question, and that’s where Framestore’s experience and sleek solution came in. When Framestore offered to work on the project, it was clear to AMV BBDO and Mars Incorporated that they were uniquely placed to showcase an underwater ecosystem on an unprecedented scale. This initiative was supported by the expertise of Walker and Framestore’s CG supervisor, Hernan Llano, who also studied biology in college before becoming a VFX artist. Along with creating and animating the photorealistic schools of fish swarming in the verdant coral, the team proved they could actually grow corals in real time for the scenes and keep them stable.

“Coral was something we talked about a lot in the early pitch meetings. We knew we could demonstrate stylized accelerated growth sequences, which I had never seen anyone do before, especially on a large scale and with the amount of scientific detail we could create at Framestore, I knew we had a unique proposition,” says Walker.

Working in collaboration, the Framestore Pictures Butler and the Framestore VFX team worked on the creative vision for the play and the intense task of bringing the campaign to life technically and narratively. The whole team discussed early on that it was important for them to capture the balance between the environmental message and the stunning visuals, so they worked in tandem to achieve this.

While there are many ways to create geometry that grows into the shape of coral, the team needed to replicate specific species using SideFX’s Houdini. Everything they meticulously created in CG and then added to the reef environment, including Chromis fish, grouper and any other sea life encountered in the film, including mosses and sediments, had to be approved by the specially appointed scientist, Professor David Smith, before being lit green for the spot. “Nature is extremely complex, and we cannot fully replicate its behavior, so we had to find clever approximations and develop very specific configurations that will give us shapes and textures similar to how corals look when they are fully developed, and how they look at their growth process,” says Llano.

“It’s about growing coral reefs and restoring the ocean – and my goal was to show viewers what it’s like in a way they can’t see, even when filming nature in time lapse” , explains Walker. “With this campaign, we’ve been able to lift the veil on nature and remove anything that would get in the way of the spectacle of seeing it evolve, and in my mind, that’s exactly what CG is for.

The biggest challenge the team faced was being able to display and render all the geometry, including the massive amount of polygons, points, and assets. In one fell swoop, the team had over eight million individual assets. “Almost everything in the ocean scenes is procedurally generated by our artists using Houdini,” saiysWalker. in unique structures, and that’s how we ended up building such a large landscape with very few duplicate assets.

Remarkably, everything in the scene was alive and moving in time with a velocity field, a simulation system that the Framestore VFX team also created in Houdini. If a large species of CG fish were swimming in the middle of it, the velocity field would react, sending a ripple effect, and just like in real life, it would cause everything in the scene to act appropriately. For greater efficiency, the whole development of the look, including the blue of the sea, the volumetric lighting of the sun’s rays crossing the ocean, the hazy mist in the distance and details like the particulate plankton shimmering through the ocean. ‘ocean, was made in the composition tool Nuke.

“The way the color reacts in a body of water was key. Grant and the team worked to ensure the foreground action was a true balance of color, with the colors fading as as we move away from the lens,” says Framestore colorist Steffan Perry. “I helped push that principle forward in color grading. We also wanted to try to make sure that sunlight hitting the top of the water was separated as we descended to the seabed. 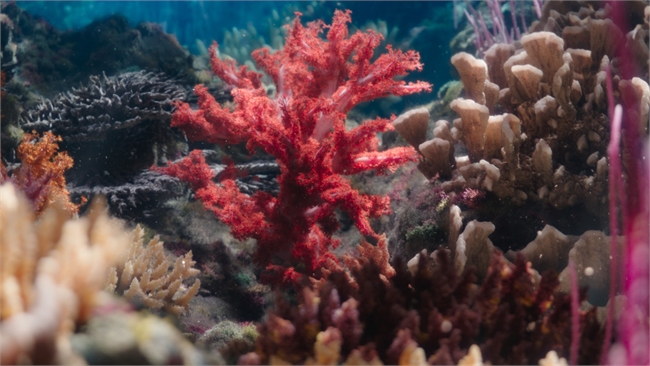 Directed by Butler, a seasoned director with a background in both live-action and CG, the film needed to be powerful enough to create a call to action – especially as the reef and countryside surrounding it guides were designed to inspire people to take action. to restore coral reefs. “We have a wonderful strength within our VFX team at Framestore to create really powerful imagery that no one else can, and for me this project was about how I could leverage our talent and portray it in the best way, while still telling this compelling story,” says Butler.

Butler worked closely with Walker to study how to make underwater cameras look more natural and ensure fish and coral behaved naturally in shots. Butler adds, “It’s important to have the discipline not to make a move that looks like a fake CG movie. We spent a lot of time removing anything that behaved differently from real life. For example, if a certain species did not naturally drift that far from a coral, it was removed from the photo.

The environmental aspect was a real motivation for the whole team. “It’s given everyone that extra push to really push the boundaries of what’s possible with technology, and we’re all very proud of what we’ve achieved, but as a director, to be able to have so much detail in every frame was jaw-dropping,” says Butler. “The VFX team worked extremely hard to create this level of quality.

The kind of attention to detail the entire team has put into every element of this campaign is a masterclass in CG, and the groundbreaking VFX work is a joy to behold. Using the coordinates given in the closing titles, you can explore Hope Reef on Google Maps on your own, which makes this project all the more inspiring.