An installation view of “Then, There”, a retrospective of Jean Jullien [JEAN JULLIEN]

Rather than the end product, the process and accumulated experiences of creating a work of art is what defines Jean Jullien’s artistic identity.

The 39-year-old French graphic designer, whose illustrations may be familiar to many, is holding his first large-scale retrospective in Korea at Dongdaemun Design Plaza (DDP) in central Seoul.

Jullien’s cartoons have been featured by brands such as The New York Times, Uniqlo, National Geographic and Yale University.

Entitled “Then, There”, the exhibition features approximately 1,000 sketches, drawings, paintings, sculptures and works of media art.

The exhibition is about “seeing what I’ve done, until what I’m doing now, and how that relates to who I was then and who I am now,” Jullien said at a conference by press Friday. “It’s seeing the journey from the beginning, before I started working properly until now.” 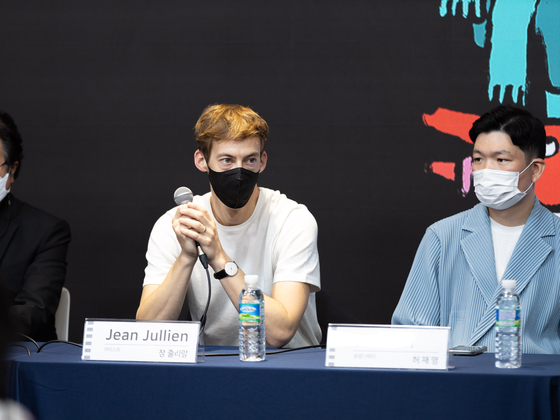 Jullien also sketched inside the DDP space for two weeks prior, noting in cursive and scribbling on the walls the process of how his works come to life – a kind of pictorial autobiography that visitors can easily follow as they go. of the exhibition.

A cartoon version of Jullien, drawn with characteristic dark circles under his eyes, kicks off the show, introducing himself in speech bubbles: “Hello, I’m Jean Jullien,” reads a large-scale open-book installation decorated as a children’s amusement park. book.

Thanking visitors for their visit, “It’s a little weird for me because it’s more or less a ‘retrospective’ exhibition, looking back at all the work I’ve done so far […] but also tell a bit of a story, give context. 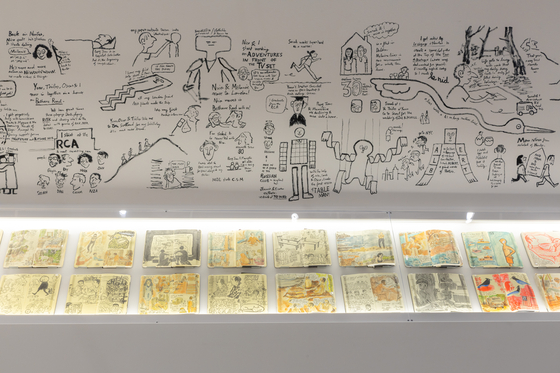 The first section of “Then, There” includes 100 sketchbooks and wall doodles by Jullien that took the artist two weeks to complete. [JEAN JULLIEN] 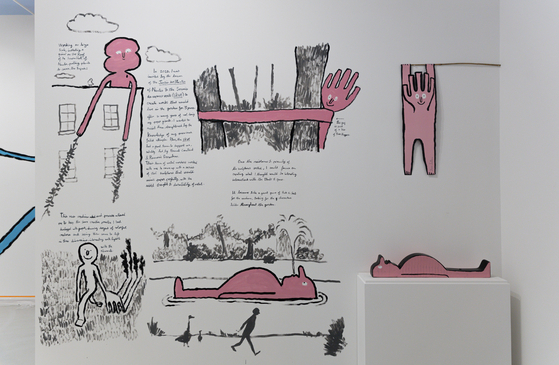 “Drawing Live” (2022), which are Jullien’s wall doodles in the exhibition [JEAN JULLIEN]

The first section of the exhibition presents 100 sketchbooks in which Jullien has scribbled since his childhood, which serve as his diary. He always made sure to have one with him to record memories or moments even on location, says creative director Jae Huh, who is a longtime friend and business partner of Jullien. The couple run NouNou, a brand that sells Jullien’s illustration-themed products.

“Jean has, in fact, over 200,000 works, which I learned from organizing this exhibition,” Huh said. “I especially learned that he is an artist who creates true works of art. Jean is able to paint more than ten pieces in a day if he wanted to, but when he worked on the murals for the exhibition, it took him more than a week to get back to his sketchbooks. to reinterpret them differently on the walls.

“It’s a significant experience that a young artist like Jean is able to fill this big space and I’m like a living witness to what he has been doing for all these years,” Huh continued. “When we are honest about our own observations and experiences, I believe this exposure will help us get back to our normal lives when the pandemic ends.” 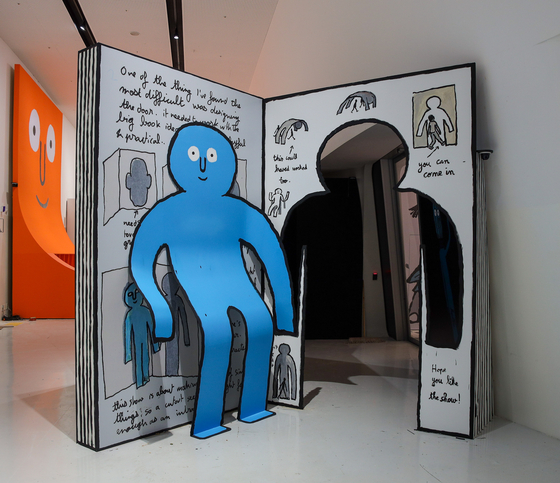 Jullien agreed that the sketchbooks played a crucial role in his life, which explains why they were purposely laid out at the start of the exhibition.

“When you see the visuals in the streets, in books and [on] social media, we get the final product, which is just one aspect of it and without much context as to what made it,” Jullien said. “I was interested in sharing [the process] with the public and I think there is a kind of generosity in doing that because you put yourself forward more; there is some transparency.

“Sketchbooks are something I’ve been doing for 18 years and they’re extremely personal and embarrassing in so many ways because when I read them again I remembered how I was at the time, and then I could relate it to what I created at the time […] and so this first room is kind of the journey as a template for the rest of the show – this constant progression and rhythm in different creations and different moments in life. I wanted to be able to share that and see how the audience would experience that. 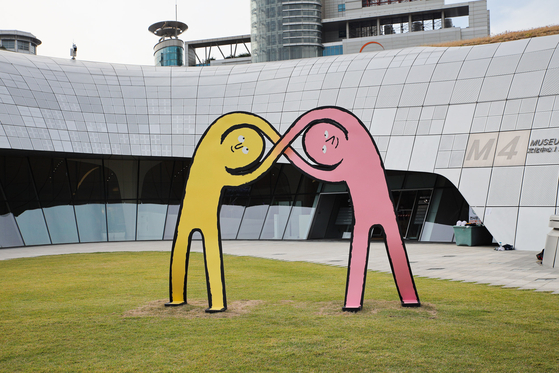 “Fusion (Working Together)” (2022) is located outside the DDP building. [JEAN JULLIEN] 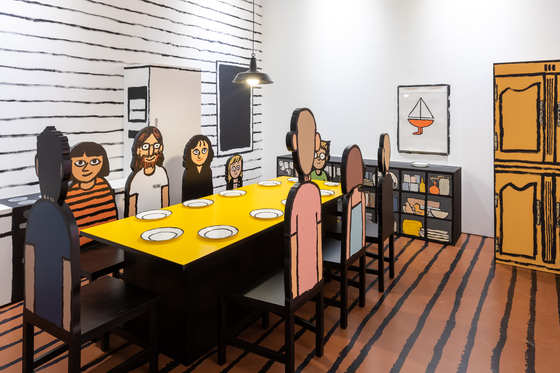 An installation view of the exhibition “Alors, là”. This one deals with the family, a recurring subject that Jullien addresses in his works. [JEAN JULLIEN]

His illustrations of wide-eyed cartoon characters with round heads and round noses, depict all sorts of narratives. Many of them relate to the family. The artist emphasized that he had a very close relationship with his own family and enjoyed spending time with them around a table, as shown in an installation.

Others are satirical and witty – a man sticking his long nose into a bottle of wine is an example. No matter what message it conveys though, they’re fun to watch.

“It’s usually quite spontaneous, I try to stay as sincere as possible when I do something,” Jullien said. “The original idea is quite spontaneous, but the final form is processed. I think that’s why this show has a good rhythm, from the beginning with drawings to journaling through different iterations of these drawings and exploring and experimenting with things […] I think it’s important to find a happy medium and spontaneity.