Each unique film in the eclectic “VS” series incorporates a “kaiju” (“strange beast” in Japanese) representing the inner demon that each athlete must overcome to define what beauty means to them.

IF embarked on the project in the scripting phase, working closely with agencies WPP (Grey and Mediacom), which they developed around interviews with Maeda. Visually, they sought to strike a balance between ancient and modern art, drawing inspiration from the works of artist Ikenaga Yasunari. Enlisting storyboard artist Tyler Gibb, the team jammed the scripts with a range of shots – from close-ups to extreme close-ups – that would capture Maeda’s frustration at not fitting in, her desire to follow her dreams. and his fear of “kaiju”. .”

“All of these expressions and action signals started on paper before we translated them into motion,” Williams says. “A shiny 3D look would have robbed humanity of Ikenaga’s aesthetic, so we hand-animated Maeda’s expressions. Cel animation, however, was not an option for the required detail of the kimonos and yukatas that our characters wore, so we 3D modeled these assets and then rendered and composited them to mimic the look of Ikenaga’s work.


IF traveled to Tahiti to film Maeda’s surfing for the live and animated surf sequences. With color and light playing an important role in the visual tone of the film, they shot at dusk and dawn, using a combination of lenses to capture beautiful golden reflections on the ocean water.

“The filming was just awesome,” says Renee Robson, Live Action’s IF Executive Producer. “Mahina’s shrewd athleticism and our team’s agility and ingenuity in getting those intimate shots during surf scenes with crews on camera boats/jet skis was incredibly exhilarating. Of course, we We also had to show the location in all its glory with our drone camera, and not wanting to miss any opportunities, we called on our underwater photography director to capture these beautiful underwater shots of our athlete. content really speaks for itself on this one!

“The longer lenses with a shallow depth of field maximized magical realism,” adds Williams. “Because this warm palette was used in our golden Byobu (Japanese folding) walls in the CG castle, the live action and animation ran smoothly. The caustic light and rippling distortions of the ocean provided incredible transitions in and out of the animated world using underwater cameras.

IF brought in photographer Matt Holyoak for the Tahiti shoot, who photographed Maeda in her kimono, yukata and jumpsuit. Yasunari used these photos as a reference to paint a portrait of Maeda, which IF used as a reference standard throughout the process. Designer/illustrator Ella Lee created all of the portraits of the spirits of Maeda and Yamato Nadeshiko seen in the film, which cel animator Jahmad Rollins brought to life by carefully analyzing everything from physical movements to dialect.

Brooklyn-based motion capture studio Silverspoon took Maeda’s surfing footage and had the actors mimic her surfing moves and apply the performance data to Maeda’s 3D model for IF to modify. .

Jeremiah Shuff, editor-in-chief of IF, has created a sound map made up of dozens of naturalistic and oceanic sounds to draw on from music production company Eclectic. Two contrasting soundscapes accompany the animated part of the film: inside the castle and outside the castle.

“We wanted to amplify the zen naturalism of the castle materials – the creaking wooden floors, the breeze gently shaking the Byobu, the fluttering cherry blossoms – yet soft and safe, like a cocoon,” says Williams. “Outside the walls, the towering ‘kaiju’ wave is deafening – wild and unattached.”

Eclectic also scored the film with thematic and emotionally powerful tracks inspired by a long list of song references provided by IF. 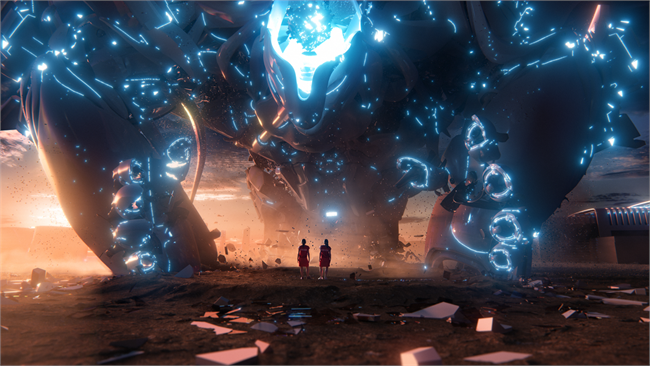 IF also created “VS Machines,” a tribute film to Japan’s first-ever Olympic badminton doubles gold medalists, Misaki Matsutom and Ayaka Takahashi. In a robotic dystopian future, their shared human connection allows them to break free from their machine-like programming and cold, joyless perfection.

“I’m thrilled that SK-II approached us for these two films, giving us the opportunity to create truly innovative storytelling with a powerful message,” Williams concludes. “It’s the kind of work I love doing and I’m incredibly proud of the results. Above all, we have done our best to be authentic – to honor Japanese tradition and culture and tell the story of Mahina in a beautiful way.