CHICAGO — With “The Suicide Squad,” writer/director James Gunn and Warner Bros. Pictures have received worldwide acclaim for creating what many consider to be the best DC Universe film of all time. For the creatives and producers at one-stop multimedia production company Sarofsky, this was their third James Gunn superhero action adventure, following “Guardians of the Galaxy” and “Guardians of the Galaxy Vol. 2.” . Once again, the assignment presented atypical challenges for Sarofsky’s expertise in typography, motion design, blockbuster VFX and storytelling on a colossal scale.

To set the wheels in motion, with editor Fred Raskin ACE (“Once Upon a Time…in Hollywood”, “Guardians of the Galaxy”, “Guardians of the Galaxy Vol. 2”, “The Hateful Eight” ), Gunn invited Executive Creative Director Erin Sarofsky and Creative Director Duarte Elvas to screen a cut and discuss the assignment. “Our discussion focused on creating titles that were bold, colorful, and worked with the underlying dynamic sequences,” Sarofsky said. “We talked about a modern/vintage vibe…something that’s very current but also has a nostalgic sensibility.”

“James was clearly looking for treatments that were reminiscent of 1960s war movies,” Elvas added. “So we looked at titles created for films like ‘The Dirty Dozen,’ ‘The Great Escape,’ and ‘The Guns of Navarone,’ and that really informed our exploration.” This initial briefing also identified a few other design opportunities: for final analysis, subtitles, and to stylistically integrate the WB and DC intro logos.

Fast forward to the first few seconds of the finished film when viewers see Sarofsky’s stylized logo treatments, distinctive Osprey aircraft appearance, prison walls and a yellow and fuchsia tinted logo they are instantly transported to the film’s metaverse.


Further on, the main title sequence begins in the midst of the military operation as Task Force X (a collection of degenerate DC delinquents, ranked by Bloodsport, Peacemaker, Harley Quinn, Colonel Rick Flag, Ratcatcher 2, King Shark and Polka-Dot. Man) invades the enemy-infused island of Corto Maltese. Mirroring “The Suicide Squad” title card’s bold stencil typeface and highlighted color scheme, the title credits begin to appear during the second phase of the stealthy beach arrival. As the band comes together, the title treatment appears in the background, until The Jim Carroll Band’s oddly upbeat track “People Who Died” kicks in, triggering a faster edit. The opening credits roll through this sequence, which grotesquely recounts the dead and dying, as mission control agents ruthlessly settle bets on the rising death toll.

To shed more light on their creative contributions and more details about their last date with Gunn and his “horrifyingly beautiful mind”, Sarofsky, Elvas and their colleagues revealed some additional key information.


According to Sarofsky, James Gunn embraces design in his films as just another character – which is why typography has been an essential ingredient in their collaborations. This time around, to match The Suicide Squad’s existing logo while embracing the vibe of vintage war movies, the Sarofsky team dove deep into 1960s films, print ads, movie covers, and more. album, vintage fonts and whatever else they could find.

“For this work, the best tool we had was our years of expertise in typography and our ability to solve readability issues in an intentionally loaded context,” Sarofsky explained. “After some exploration with the filmmakers, we landed on Alpha Midnight, a 1969 typeface designed by Hiroshi Yamashita, to inspire us. We ended up modifying it so heavily that it could be its own unique font.”

Sarofsky continued: “Taking on the challenge of creating a lot of different elements for the film, it was really important for us to make sure that all the executions were related to each other, while still working well for where they were. in the movie.”

With a type set in their custom version of Alpha Midnight for every moment in the main title, for every scene that needed a subtitle, and for the final analysis, Sarofsky’s creators then added more patent art to visually tie in to the war images of the 1960s.

“The steps we took to make the titles appear as if they were optically printed on actual film were key to making it look like a 1960s movie,” Elvas said. “To make them perfect, each graphic took at least a dozen Adobe After Effects layers, including textures, grain, glows, bevels, and drop shadows. There’s also a very subtle gate weave to all graphics which further emulates the film effect.” 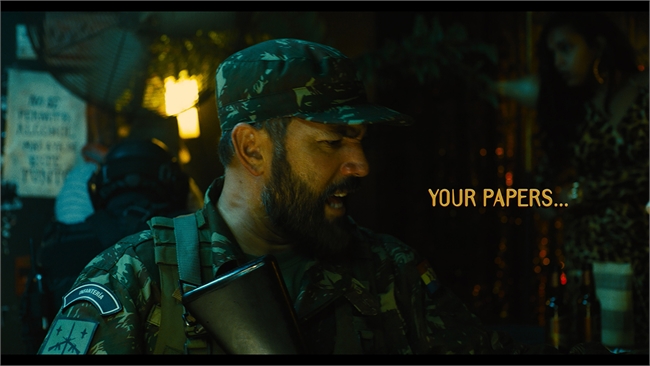 With Adobe Illustrator used for character design and setup, After Effects served the team for look development, layouts, and animation. Sarofsky’s end-of-crawl approved designs were provided to Scarlet Letters, who set the typography and animated the scroll.

“Our ability to integrate directly into the VFX pipeline for major cinematic post-production is a huge source of pride for us here at Sarofsky,” Anderson concluded. “Our well-established workflow allows us to contribute footage rendered to all the right specs, and thanks to our experienced team, our work not only looks great, it fits perfectly. It’s quite an achievement for such a phenomenal film from one of the world’s greatest filmmakers.”