In the movie Shang-Chi and the Legend of the Ten Rings, after the Ten Rings successfully steal Shang-Chi’s pendant following a heartbreaking attack on an out-of-control city bus on the streets of San Francisco, he and his friend Katy fly to Macau, where he is lured into a gambling den inside an unfinished skyscraper. There, Shang-Chi unwittingly gets into a fight – with his estranged sister, Xialing, owner of the Golden Dagger Nightclub, essentially a fight club.

According to production visual effects supervisor Christopher Townsend, the filmmakers wanted the scenes to be flashy and a bit different from the naturalistic world of some of the other scenes.

A full wall of the interior set was mirrored, with much of the action taking place in the reflection. With film crews and stunt doubles to remove, and destruction and combat performance that needed improvement, Method Melbourne built most of the set mirrored along the Z axis. digital replaced sections of the performance, along with various effects including window destruction and mirror destruction.

Eventually, the brother-sister battle moves to the outer wall of the building, along bamboo scaffolding attached to the mirror glass building’s exterior, before Shang-Chi and Xialing join forces against the Ten Rings gang. . The majority of the scaffolding, as well as the realistic neon-lit city, was built in CG by Rodeo after COVID canceled plans to shoot background footage in Macau. The digital city, based on the real city of Macau but with tweaks for creative storytelling, contains thousands of lights, pedestrians and cars, procedurally designed to give the impression of a bustling city, explains Townsend. It also offered creative freedom in the design and artistic direction of the plans.


“It’s a pretty big set, and the whole thing was built on a hinge so it could be titled at 45 degrees, which allowed us to do some intricate stunts,” Townsend says of the battle on the side of the skyscraper. “We were shooting against a blue screen, then composing and building our whole world around it, including expanding a three-story structure to 56 stories, and adding all the lights and atmospheres to make it look real. ” (The fight itself takes place over 36 digital floors, from the start to the end of the stage.)

Over a period of 17 months, Rodeo worked on 155 shots for the sequence. For Digital Macau, Matthew Rouleau, Environment Supervisor at Rodeo, started with Google Maps and Open-Street-Map (OSM) data, using photogrammetry tools to extract approximate geometry for each building in the city. , and filled the empty canvas with their. The group then extracted the topography/elevation data and used it to precisely shift the ground plan, which gave them the most accurate starting point to build the city.

The CG artists then built buildings for the skyscrapers near the heroes building containing the club, followed by the mid-res structures in the main downtown section. They then created various types of architecture and procedurally dispersed them across the precise ground plane. They also designed all building interiors (offices, apartments, etc.) using HDR images through an OSL shader that procedurally mapped these interiors to low-resolution geometry.

The environmental team used a combination of Maya, Mari, Blender, Substance Painter, Clarisse from Isotropix and Adobe Photoshop for the matte paints. Additionally, Golaem was used for crowd simulations, Houdini for effects and simulations, Katana for look-dev and lighting, and Autodesk’s Arnold for rendering.

According to Ara Khanikian, Rodeo VFX supervisor, the size and photorealism of CG Macau presented the biggest challenges, as did the reflection of the entire city in the skyscraper’s window. Rodeo categorized all the shots to match in continuity and created a LUT sequence that gave the whole scene a better and more realistic nighttime look.

In addition to building a CG Macau, Rodeo also built the skyscraper and scaffolding. “We built the skyscraper in a very modular way to give it all the control we needed throughout the sequence,” says Khanikian. “Knowing that the height and width of the building would potentially be changed to meet the needs of specific plans, we separated the building from the interior concrete structure and exterior mirrored glass panels and mullions to easily duplicate and modify certain parts.”

The window mullions needed to contain a notch where all the vertical bamboos in the scaffolding attached to the building. The scaffoldings themselves were also built in a modular way. The team constructed individual hi-res bamboo sticks to match those constructed on set, and proceeded to assemble groups of sectional scaffolds and scatter them around the four sides of the building. Fabric straps have been created and distributed over all pole connection points.

“The skyscraper’s glass windows were an extreme hero element in every shot, so we spent quite a bit of time on it developing the reflective shaders and how they affected the coloration and brightness of the reflected renders as well as the dirt and smudge textures on it,” says Khanikian. “We knew from the start that composing a shimmer-tinted color was going to be a key aspect of the look and one that would ensure that audiences would always be able to quickly differentiate between looking at a reflection and looking directly at Macau from the shot.”

For added detail and continuity, the studio built wooden planks that people could walk and run on, and spread them across all sections of the scaffolding. Various props like this have been logically positioned within the main digital set with additional controls to easily change and replace their positions and visibility per shot. 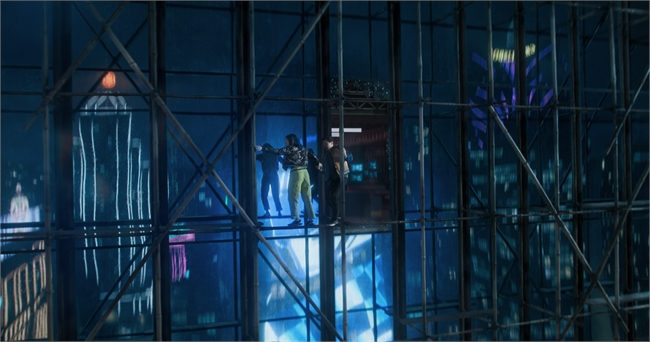 As Khanikian notes, one of the complex aspects of building the hero skyscraper was putting the various sub-assemblies together, allowing maximum flexibility for modifications, continuity, and the introduction of variants (broken windows, for example) during combat. This was achieved through an early analysis of the fight sequence and a mockup of the entire scene with each shot marked at a specific location on the skyscraper. “It identified which window they come out of at the very beginning of the scene, where and how high each shot takes place, which window should explode, which sections of scaffolding should be damaged, where the scene ends, etc. before,” says Khanikian, adding that it also allowed the group to determine how many stories the action takes place over.

Once each shot was moved, the layout team could easily place each camera of all shots into a master layout scene with the entire skyscraper and manage the continuity of all elements, from the foreground last. “This step was instrumental in ensuring the asset evolved over time with different story points over time throughout the sequence,” Khanikian notes.

Additionally, Rodeo created many digi-doubles to enhance some of the action, although many actors did some of their own stunts; the artists also added CG versions of the Ten Rings soldiers falling to their death.