Disney•Pixar Lucas – about two young teenagers and their summer of exploration and fun on the Italian Riviera – has a wide cast of characters, some of whom live underwater and others on land.

Luca’s family consists of sea dwellers, creatures inspired by depictions of sea monsters found on ancient Renaissance maps, as well as scientific illustrations of local fish in addition to Japanese dragons and snakes. . In fact, different types of fish have been used as references for the characters in different ways. For example, a larger silverfish, such as a large tuna or a barracuda, was used as a reference for Alberto. A more colorful species, such as a reef fish, was used for Luca.

“We looked at marine iguanas because of the way they swim underwater and use their limbs, and their tails are really interesting and different from how another type of reptile might move or swim,” says Beth. Albright, character supervisor. As a result, the sea monster versions of the boys are more creature-like and less human-like when swimming. “We combined all of these different influences to make our sea monsters truly unique,” ​​she adds.

The artists also had to ensure that the underwater animation depicted drifting and water resistance. “The characters couldn’t stop too suddenly in the water, so they would strike a pose and then float around a bit, letting the energy dissipate in the water and slowly come to a stop,” says Michael Venturini, supervisor of the ‘animation.

The creatures, which are hardly monsters, are attractive and expressive, each playing a stereotypical family member role. Daniela is Luca’s overly cautious mother, whose number one rule is to stay away from the surface of the water, where supposedly land monsters live. Lorenzo, Luca’s father, is often distracted by his hobby of raising prize crabs. Grandma, meanwhile, understands Luca’s desire for something more and secretly supports his adventurous ambitions.

The inhabitants of the human city of Portorosso are representative of those found in a typical small town. In all, the artists created 56 characters for this film, some main characters and others relegated to the background. “It’s one of those movies where we don’t literally fill the whole place with a bunch of characters. We know them,” Albright says. time with them and that quality shows on screen.

Ercole, a swagger, is the town bully who likes to target Giulia. He also owns a shiny Vespa and is the repeat champion of the city’s Portorosso Cup race, which Giulia aspires to win. Giulia is friendly and adventurous, although she doesn’t have many local friends since she is a summer resident who lives there with her divorced fisherman father. Thus, she quickly befriends the two strangers – Luca and Alberto – who suddenly appear in town.


The Disney•Pixar movie’s main characters, Luca and Alberto, posed an even greater challenge to character artists and animators than the rest of the Luca cast due to their shape-shifting abilities. In some shots, these characters appear in a mixed form. “It took us about a year to figure it out,” character supervisor Sajan Skaria says of the transformations. The goal was to make the transformation bold and crazy, but not scary.

The group began by looking at various character transformations that have happened on screen, such as Mystique’s transformation in X-Men, which involved feathery, scaly textures. Still, Pixar wanted something more exaggerated and stylized in terms of looks, as their character scales needed to be much larger to fit the style of this movie. The team was also inspired by the ripple running through Gigi the cat’s fur in Hayao Miyazaki’s film Kiki’s Delivery Service.

Artists used its 3D pipeline to achieve the desired look, which includes tools that have evolved from previous shows, such as a silhouette drawing tool used on Inside Out. Additionally, new tools were built for this movie, such as robust controls to make the eyes look more graphical, as well as the transformation platform used to shapeshift Luca and Alberto.

During the transition phase, the human and sea monster platforms are present, along with a third, the transformation platform. As parts of this platform are lit, elements of both platforms (human and sea monster) are revealed. “It’s like a magic trick where we only show parts of the human and parts of the sea monster, but we give that control to the animators so they can drag things and turn things on and off, and show bits of each character,” Skaria explains. “We literally have two Lucases in the same space and show bits of each.”

Typically, these transformations would be hidden off-screen or obscured by adding smoke in front of the character, for example, due to the effort involved. However, the director was very specific about what happens on camera to Luca. “That’s the heart of the movie, it’s about Luca as a human emerging from a sea monster, and we want the audience to see that,” Skaria says.

When the character becomes fully human or fully sea monster, the transformation rig was not needed and the shot was animated normally. 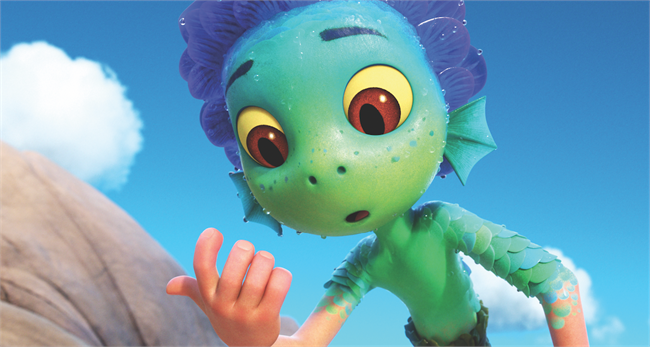 
The transformation occurs in and around 50 shots, so the artists put a lot of time and effort into it. Most of the time, however, the characters appear in one form or another. “We wanted to feel the hand of the artist in everything we did on this film,” says Albright. For example, all the scales of the sea monsters were hand painted by an artist. These paintings were then used to derive the geometric scales used by the artists as part of the transformation process. In total, the sea monster Luca has 3,436 scales on its body.

Luca’s animation style is inspired by 2D animation. “For the animation, we wanted to incorporate the bold, illustrative choices and stylized timing of 2D animation, while preserving the richness we expect from a Pixar film,” says Venturini.

In total, the film has 1,500 shots, but the artists produced an average of 10 drawings per scene (about 15,000 drawings) to help the animators stick to illustrative design with their poses.

According to Venturini, the facial platforms were particularly different, especially at the mouth. The characters have fun, graphic mouth shapes that can be especially small or large. However, to get the consistent round corners of the mouth required new rigging.

“To be more illustrative, we had to come up with new controls, especially with that design language that Enrico wanted, and be able to move the mouth all over the face and go in profile,” Venturini explains, noting that there are 221 and 223 individual commands in the mouths of Luca and Alberto, respectively, to help the animators create the rounded mouth expressions used throughout the film. “Most of our characters in an average Pixar movie have a narrower range of motion, so the rig doesn’t have to be as sturdy or versatile. animation, we were just breaking the technology that we had by default, then we started building the new parts that we would need respecting the design language.

Typically, the animators steer clear of characters moving in profile, but on Luca they embraced it, focusing a lot on silhouette and pose design. Here, the silhouette is clean and round. There’s not a lot of anatomy; the designs are simple, bold and graphic. In order not to break the silhouette when the character is in profile, the artists turned the head while keeping the mouth inside the silhouette and then inserting it into the profile. Custom controls and sculpting allow artists to adjust silhouettes, profiles, and mouth and eye shape to allow for desired versatility. “It felt more like a 3D hand-drawn quality because we were literally sculpting in space with the camera,” Skaria adds.

Along with the squash-and-stretch style came some fun design changes, including multi-limb animations, popular in the 2D world, to illustrate the fast-paced action. This was done using a variation of the transformation platform, only in these cases he used two human platforms, for example, as opposed to a human and sea monster platform.